For this exercise I decided to return to the pub theme for a second time (last time I promise!).  I had the idea that a pub has a steady procession of people coming in and out all with different stories to tell.  But most of them come and go with the company they arrived with, often not engaging wider apart from withe the landlord.

I often visit my local on Saturday lunchtime so decided to carry my camera with me and place it on the table in front of me.  I would then start a conversation with whoever came to sit next to me with a view to taking their picture.  The aim was to make that particular seat becoming a focal piont, a podium, for whoever passed through.

I’d never met Andy before and he presents a rather intimiading character.  He is a lifelong fan of the Manchester City football team, evidenced through numerous tatoos, a beard in time colours and tshirts.  Apparently Andy always dresses like this – he was not on his way to watch a football match.  He had stories to tell, many of which involved getting into scuffles.  By day he is a bus driver and expressed annoyance that the bus he drives is in the opposing team colours.

John is a retired potter and school teacher.  He is also the Green Man of the local Morris Dancing team and often gets asked to impersonate Santa over the winter season.  Turning slightly to one side makes it easier to hear when the pub is noisy, apparently due to his new hearing aid.   Afterwards I wished I had put his hands in shot as a link to his trade since this would have made for a more interesting final image.

Tony has befriended an injured jackdaw that was found by the pub landlady.  At home Tony is a also full time carer for his enderly mother. 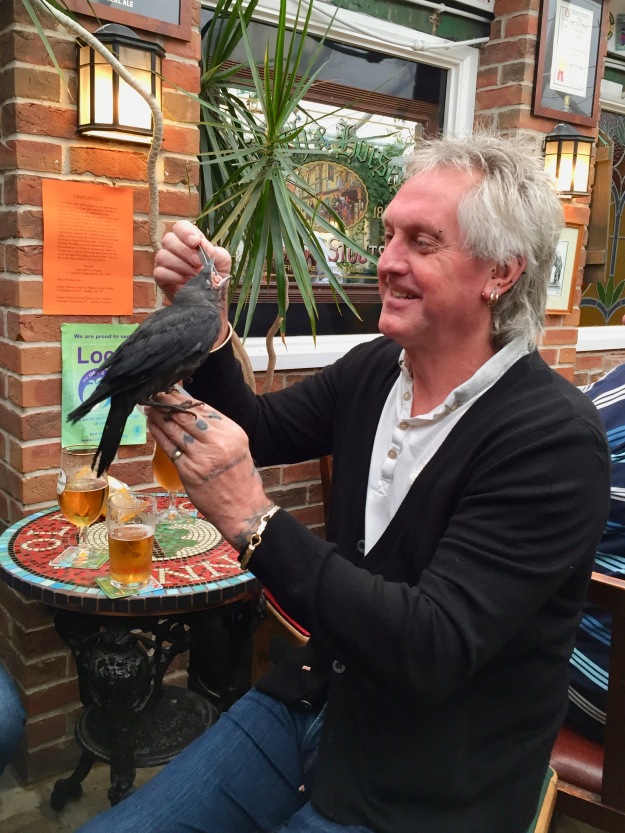 With hindsight I can see that I broke the rules with this last photo, having rotated my chair and taken it from a different angle.  While still recognisable as the same venue, it is clear that this breaks the uniformity of the overall set in the way the Irving Penn did: https://wordpress.com/post/ian513626photography1iandp.wordpress.com/1106.  Suddently this background seems more important because it is different, so confuses the eye as it looks for the meaning to the set.

This is an exercise I could do a lot more with.  The context of a pub is clear in the background and a 35mm lens gives a sense of environment without being uncomfortably close to the subjects and introducing distortion.  Almost like speed-dating – there is a sense of a procession taking place before me, people coming and going.

The key learning from this exercise was how you don’t get a second chance.  I could have made a better image of John to contextualise his hands as a potter but the thought occurred to me too late.  That’s a valuable lesson in pre-visualising the shot and directing the subject to attain what is in my mind.

There was an error retrieving images from Instagram. An attempt will be remade in a few minutes.